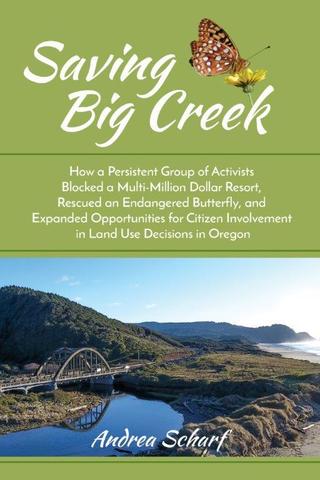 On a map, the rivers and creeks of Oregon's Coast Range look like the veins of a giant leaf. They flow east to the Willamette Valley and west to the ocean from a spine of low mountains that run north and south from the Columbia River to the Umpqua. Tiny feathery blue lines merge with slightly bigger lines and then bigger still, until finally there's a creek worthy of the name. Where the drainage is short and the exit plan is directly into the Pacific Ocean, the creek is considered a tributary to the ocean, commonly called an ocean trib. Big Creek, in the northwest corner of Lane County on the Central Oregon Coast, is an ocean trib.

Big Creek begins as a seep on the headwall of a canyon—a wet spot under a rock, a little muddy patch under the ferns, a place from which a dribble of water begins to move downhill. There's not much wiggle room between the steep sides of the draw. The trickle is tiny. Trees clinging to the slope shade the nascent creek and sometimes fall, choking the canyon with giant pickup sticks.  Another little rill joins the first, and another, until the draw widens and several little rivulets flow together.

Watershed managers refer to the drainages as "fields," and assign a number to indicate how far up the network of tributaries their drainage goes. The tiniest creeks are Field 1. When they reach a certain flow, measured in cubic feet per second (cfs) they are numbered 4 to 6. Big Creek is a Field 4 stream, similar to many other ocean tribs along this part of the coast, flowing from the ridges down to the ocean: Cape Creek, China Creek, Big Creek, Rock Creek, Tenmile Creek, Bob Creek, Cummins Creek, Gwyn Creek, another Cape Creek, the Yachats River, Vingie Creek, Starr Creek, another Big Creek, a few more small tribs, and then the Alsea River.

The Alsea is a big river system, covering more than 299,704 acres, with 450 miles of streams in its watershed. The main stem of the river is 43.5 miles long and is navigable to tidewater, about twelve miles from the mouth. The Alsea's broad estuary once supported intensive salmon harvest, canneries, and timber mills. Now it's a popular location for recreational fishing and crabbing, kayaking, and birding.

The mis-named Big Creek in Lane County is a small system. It's one of nine drainages grouped together by the Siuslaw National Forest as part of their Cummins/Tenmile Watershed Analysis. The entire drainage is about 55,000 square miles. Big Creek itself is approximately twelve miles long. It is not navigable.[i]

Most of the small ocean tribs flow right into the Pacific, but Big Creek spreads out near its mouth to form a freshwater wetlands before it enters the ocean. The bigger systems like the Alsea River and the Yachats River are tidal, flooded diurnally by salt water, forming saltwater marshes. These wetlands are valuable habitat for young salmonids, which use the slow moving water as a refuge during the transition into their ocean-going adulthood. At Big Creek, a rise at the mouth blocks the salt water. Without a salt marsh to provide a sheltered nursery, the fish in Big Creek have had to adapt. Since the fish have been returning to this river to spawn for hundreds of thousands of years, they have created a unique subspecies that foregoes the usual saltwater transition. At one time, great numbers of Coho, Chinook, Steelhead, and cutthroat trout thrived in Big Creek, just as they did in most of the ocean tribs. Big Creek used to be a popular fly-fishing stream, but the fish populations are now greatly diminished.

From the moment I decided to tell the Big Creek story, I began stopping along Big Creek Road whenever I traveled south on U.S. Highway 101. At milepost 175, just north of Conde McCullough's graceful bowstring arch bridge, I turn left, cautiously because the asphalt has eroded, creating a tire-eating pothole just past the junction. Soon the asphalt gives way to gravel as the road flattens out, then climbs along the north side of the river.

It's a pleasant walk nearly any time of the year. Usually I see no one. Occasionally there's a fisherman walking along the road or a pick-up truck goes past; we wave the way people do on rural roads. My dog busies himself exploring scents and occasional deposits of scat. About half a mile in, old fishing trails lead down to the river and a couple of abandoned campsites. Water seeps out everywhere, merging with the fast-flowing creek. Logs crisscross the creek, slowing the flow, creating quiet backwaters where young fish find refuge during high water, and capturing gravel and cobble where hen salmon dig nests, called redds, in which to lay their eggs.

In the spring, the world is new and very green. Great shiny leaves of skunk cabbage emerge in boggy areas. The waxy yellow bracts shelter a stem of tiny flowers like a lantern protecting a flame from the wind. The smell is sharp, pungent, not unpleasant, although the odor of the flower itself is more appealing to flies, attracted by the smell of rot.

Catkins appear on the willows, male on some plants, female on others, soft and fuzzy, stroke-able as a cat's tail. The triumphant triple-leaved Trillium, its creamy-white three-lobed flower nodding on a slender stalk, pokes out of the ground under the firs. Delicate in appearance, the wet leaves are crumpled until they finally spread out to reveal the lovely flower. Under ideal conditions, a trillium can live for eighty years.

Soon there are small flowers scattered like rice at a wedding, the leaves and stems commingled in an orgy of green. Some are as small as my fingernail. I look them up in the Audubon Guide to Western Forests, trying to match pictures with the truth on the ground. The names are like the dramatis personae in an Elizabethan drama: Queen's Cup, Bishop's Cap, Monkshood. The disloyal courtiers are False Lily-of-the Valley, False Miterwort, False Solomon's Seal. Tiny drops of deep magenta, delicate white stars, spikes of pale chartreuse. Yellow Violets, Western Bleeding Heart, Redwood Sorrel, Yerba Buena, Miner's Lettuce and Rattlesnake Plantain, Saxifrage and Vanilla Leaf, the latter used by early settlers to freshen their laundry.

I remember the stories my friends have told me about looking for the elusive and bizarre Long-tailed Wild Ginger, also used by early settlers to spice up their food. The expeditions were led by Tom Smith, a naturalist and a teacher, legendary for his ability to stand in one place and rivet everyone's attention for hours, guiding them from the fungus and rhizomes under the ground to the tangled mat of groundcover plants, from the ferns, salal, Oregon grape, all the shrubs and bushes, and right up the rough trunks of fir and spruce to the canopy where, with a little luck, a flying squirrel would leap out and coast from one tree to another.

I could use Tom's expertise now to identify the riot of plant growth, although there's also pleasure in just observing the splash of color, clueless as to name and function. The temperate rain forest explodes with life after the gray winter months. All too soon, the green begins to overwhelm. Everything leafs out, until I can no longer parse the details of the landscape or even see into the near distance. Every opening created by floods, landslides, fire, and logging is filled with a thick understory, penetrated only by animal trails. Salmonberry, blackberry, and thimbleberry thrive anywhere trees have been removed, anywhere sunshine can reach. I can easily imagine the despair of the early settlers who battled without pause against the vegetation that threatened to engulf their homesteads. In what seems to be a mild, innocuous landscape, the profusion of plant life feels as if it is intent on evicting the intruders.